Haines, Alaska and the bald eagle

It's not the easiest place to get to... or the easiest conditions to work in... but if you want to get National Geographic quality pictures of an American Bald Eagle... you need to head to Haines, Alaska in November. That's where I just came back from.

There are a few places you go in the world to get certain shots. If you want grizzly bears, for example, you head to Brooks Falls in the Katmai Wilderness. Polar bears... Churchill, Manitoba. Puffins... Machais Seal Island off the coast of Maine... Wolves... Yellowstone National Park... and so on.  And if you want Eagles, you go to Haines.


You see, in Haines, Alaska there is a river called the Chilkat. It's not all that special when you look at it. Looks pretty much like most Alaskan rivers. But here's the deal. The Chilkat has a Geothermal spring under one section of it... the section just outside Haines. And here's why that is important. Salmon run up the Chilkat every fall by the thousands where they spawn. Anyone who has ever studied Salmon knows what an amazing story that is in itself. Then, they begin to die. It doesn't happen all at once but it always happens. The salmon grow distorted, stop eating and basically give up, dying in the river they were born in. This happens just as winter arrives in Southern Alaska. And winter shows up quick. When it does, it freezes the Chilkat. The salmon that aren't caught in the ice begin floating downstream with the current... under the ice. Some of them are dead... the rest of them soon will be. They float under the ice for quite a long way... until they reach the Chilkat Bald Eagle Reserve just outside of Haines. Here's where it gets interesting (nature is pretty fascinating actually). Because of the thermals under the Chilkat near Haines... the river does not freeze. Or at least parts of it don't. So eventually the remaining salmon, either dead or dying, pop out from under the ice.... and the eagles are waiting. By the hundreds. Some years as many as 3500 eagles have been counted in the trees around Haines. They come for one month, November... and so do the photographers. There is no better place in the world to photograph eagles. They fight, they fly, they swoop into the water, they land in the trees above you. The photographic opportunities are second to none.

But this adventure is not for the saturday afternoon photographer. Alaska, in the winter, is a rough place. You can die there... quickly. And it's not the easiest place to get to. First, you have to get to probably Seattle. From there you catch another flight into Juneau. From Juneau you can possibly fly into Haines but that is risky. Mainly because of the Alaskan winter. Air travel in Alaska is not like catching a flight to Atlanta. The weather can ground planes for days. It's happened to me before. So the reliable thing is to take the ferry out of Juneau into Haines. The ferry is pretty reliable. In the last several years it has only "not" made it once.... when the waves were 14 feet high. But for the most part, it's the way to go. Plus, you can pick up a four wheel drive vehicle in Juneau and take it on the ferry with you. Haines is small. They have a few rental cars... but few four wheel drive vehicles. So get your car in Juneau. The ferry ride is about 4 hours from Juneau and if you get a nice day it is one of the most beautiful sections of the inside passage. We had a super clear day on the way up... but the waves were 7 feet high and the wind was gusting to 40 miles per hour. And it was 15 below zero... making the wind chill factor 43 below. Needless to say, it will wake you up. The decks were covered with ice making it look like something out of a movie about an antarctic expedition. But it was unique and super cool.

Once you get to Haines you won't find much. About 2000 people live there but not all of them stay for the winter. When we got there it was 14 below in Haines. There are a few hotels in town but there's a catch with that. Haines is coastal, so they don't get much snow. Chilkat is 24 miles inland... and they do. There is a lot of precipitation there in the winter. So its not unusual that you could leave Haines in the rain and end up in the snow within 30 minutes. And between here and there.... is ice. You do not want to drive off the road in this part of the world. They'll tell you to keep a candle in your car so you can stay alive all night by burning it on the dashboard if you get stranded. How many of you have a candle in your glovebox? Me neither.

Here's the other catch. Alaska is a super cool place to visit in the summer. The sun comes up at 4 am and goes down at midnight. They shoot off the 4th of July fireworks in Anchorage at 1am. But in the winter, it's the exact opposite. It's not light enough, even on a clear day, to shoot pictures before 10am. And by 3:30, it's dark.

So I'd recommend staying out near the eagles. Figure Haines is mile zero. The eagles are good at mile 24. And the Canadian Yukon starts at mile 40. At mile 33 there is a place called 33mile (go figure). They have two cabins and a restaurant log cabin which is the only place to get food between Haines and Canada. More importantly, they are open all year, at least until 6. It's classic Alaska. Stuffed wildlife on the walls of of log cabin/diner where they serve food on plates the size of your steering wheel. But trust me, this is no time to watch your figure. The human body gobbles calories trying to stay warm... and believe me, you will be trying to stay warm. Fashion goes right out the window when you are in Alaska. It's all about staying warm. While I was there the temperature never got above zero.... and it was usually south of 10 below. An eagle will pull a salmon out of the river and it will be frozen solid by the time he gets it to a tree. No lie.

Moose are everywhere. Usually you will see more moose than people. And you will see bear tracks in the snow. Yes, bears hibernate. But because of the late salmon run and the plentiful fish... the bears stick around longer than they should. So you have to be careful. Out running a grizzly bear is a difficult task in the best of conditions. Doing it in 3 feet of snow is impossible.

Maybe all of this is why the bald eagle still fascinates us. You don't see many of them and the ones you do see are hard to get to. But they are awesome and they will captivate you. The people in Alaska think of them as scavengers... much the same way we do seagulls. But I loved them. So enough said... here's a little "eye candy" from the trip. More pictures can be found on my still photography web page at oasisphotography.com. If you want more information about heading to Haines... or alaska in general, drop me a line. I'll share what I know. I've done my share of walking around up there. 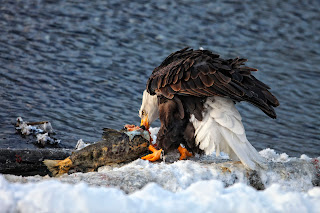 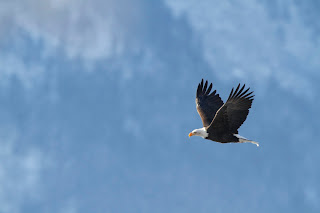 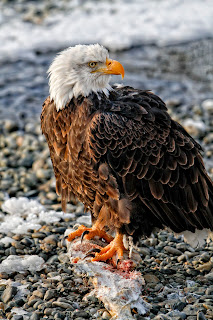 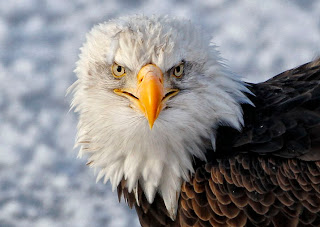 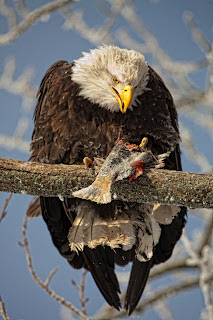 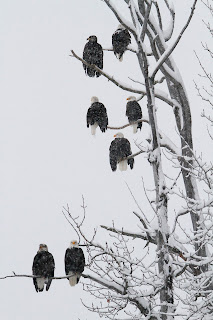 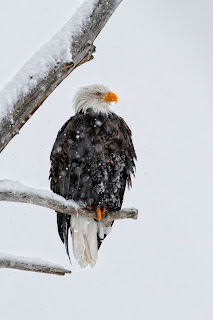 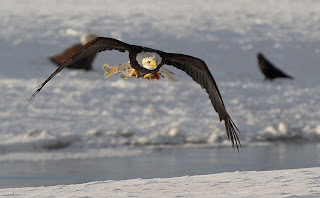 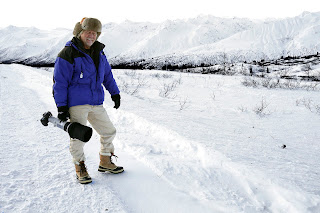